The main building of Ainola was designed by Lars Sonck (1870-1956), who was one of the most famous young Finnish architects of his time. He is best known for his Art Nouveau-styled churches and public buildings, but he also designed dozens of wooden villas during his career.

It has been often wondered why Eliel Saari – Sibelius’s age-mate and good old friend – wasn’t asked to design Ainola. Five years younger, Lars Sonck, was probably chosen as the architect, because Villa Enckell (nowdays Villa Cooper), designed by Sonck, had just been finished near by in Järvenpää and its builder Gösta Enckell might have recommended the architect to Sibelius.

Ainola differs from Sonck’s earlier log houses that were more national romantic. The only indications of traditional building styles are on the balconies made of round logs on the west side and the east corner of the building. The unusual gridded windows with dark green weatherboards and the changing shape of the roof are clearly Art Nouveau. Architecture wise Ainola resembles most closely Sonck’s Villa Cooper.

Ainola is located on a hillside a half a kilometer to the east from the Lake of Tuusula. The property they bought was originally quite small, but over the years the family bought more land and now the property is about 4 hectares large and includes the whole nearby forest.

The construction of the villa started in 1903 and was finished the next year. The villa was originally a log house with a shingle roof, and only the downstairs was in use.

In 1911 the kitchen was enlarged and the upstairs was finished and put to use. The bedroom of the parents and Sibelius’s study were placed upstairs. At the same time Sibelius’s previous study downstairs was made into a drawing room and its wall to the dining room was opened, which made the interior more spacious. Concurrently the building got its white weatherboarding, which is what Sonck had originally planned. When Sibelius turned 70 in 1935, the children’s room downstairs was turned into a library according to the plans of Sibelius’s son-in-law architect Aulis Blomstedt. 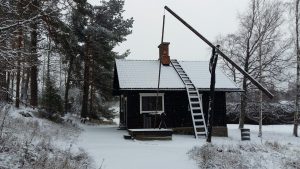 The sauna building designed by Aino Sibelius was finished about year after the main building. However, it burned down and was rebuilt in 1925. Aino designed a very special water system that would make their life little bit easier as there was no running water in the house.

Ainola was the Sibelius’ home for over 60 years. Thus the furniture are from different decades. The oldest furniture was inherited from their families from the 19th century and the newest was bought in the 1930s and 1950s. 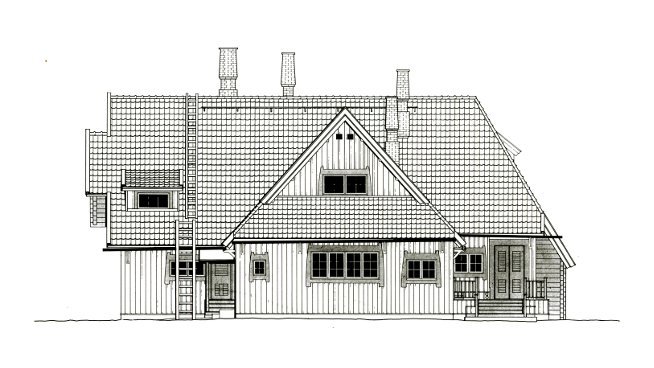